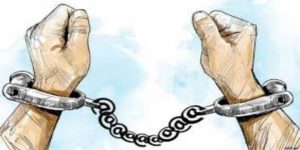 Spokesperson of the District Police Office Padma Raj Thapa shared that they were arrested by the Ward Police Office on the charge of manhandling Captain Dangol, who landed a helicopter on the playground where the football match was going on in Walling Municipality-8 of Syangja on Thursday.

Among those arrested are four passengers who came from Pokhara to Walling by the same helicopter and two people who misbehaved with the pilot after the helicopter landed at the venue of the match. Police spokesperson Thapa said that pilot Dangol was forced to land the helicopter on the ground where a football match was being played.

The helicopter was landed at the venue of the match without giving prior notice to the local administration and the host club.