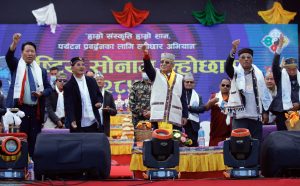 Kathmandu: Prime Minister Pushpa Kamal Dahal ‘Prachanda’ has said Nepal is richest in the world in terms of culture and civilization.

Addressing the Sonam Lhosar Ceremony marking the 2859th Tamang Lhosar Festival in the federal capital today, he observed that Nepal’s art, culture and civilization has its uniqueness and characteristics. “I extend my best wishes to all Lhosar celebrating sisters and brothers within the country and abroad for their good health, prosperity, progress and for the wellbeing of the entire humanity on the auspicious occasion of the Lhosar Festival- the 2859th Hyoie Tawar Lho (the year of the cat) celebrated by the mountain indigenous nationality communities including the Tamangs.”

Stating that Nepal is a confluence of major civilizations from the east, west, north and south, PM Dahal said Nepal is home to 125 ethnic communities, 123 linguistic communities and more than 10 religious communities. All the castes and ethnic communities living in Nepal have their own traditions, customs and culture, and the combined and integrated form of all these cultures is the Nepal’s national culture.

“That our country is a multi-cultural, multi-linguistic, multi-ethnic and multi-religious nation is itself a matter of pride for the Nepalis,” he said, terming it as the national asset. The Prime Minister described the Lhosar culture and Tamang ethos as an integral part of the Nepal’s national culture. He viewed that Lhosar is one of the world’s oldest cultural tradition. “This festival is called Sonam Lhosar or the Lhosar (New Year) of the Sonam (farmers) as it developed with the beginning of agricultural society.

Mentioning that Tamang community celebrated Lhosar (New Year) as the first day of the first month in the Tamang Manjushree calendar, he said, “Yesterday, we bade goodbye to Takalho (Tiger Year). From today, Hyoie Lho (Rabbit Year) has started. So, the Tamang civilization is science and philosophy that understands human and nature life. This also reflects the origin, civilization, culture, existence and identity of the Tamang community. I understand that life and culture of Tamangs is being run through the belief and tradition of Lho.” Lho tradition has special importance in the areas of religion, society, economy, culture and health, viewed the PM.

“Lhosar is not only the festival of the Tamang community. This is celebrated in the national and international levels. There are many festivals as such that carry historic and scientific significance. But, many cultures of the country are disappearing due to apathy of the feudal system in the past. Human civilization is also dying. On the other hand, the western culture is also replacing national culture of Nepal. In this context, my view is that the state should promote all these national cultures.” Not only in Nepal, Lhosar is celebrated in countries having Mongol and Chinese civilization like China, Mongolia, Japan, South Korea, Laos, Thailand, Vietnam, Taiwan, Malaysia, and Singapore.