Three people got arrested with 713 passports in Gongabu 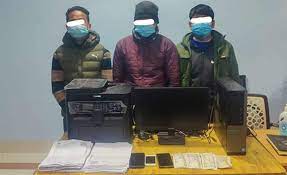 Kathmandu: The Kathmandu Police have held three persons with 731 passports from Gongabu in Kathmandu Metropolitan City-26.

A team from Gongabu Police Sector acting on a tip off made the arrest from two hotels in Gongabu, and confiscated the passports from them, according to the police headquarters. One of the arrestees has been identified as Lokjung Khadka, 48, of Betkot Municipality-3 in Kanchanpur district.

He was currently living in Tokha Municipality-9 in Kathmandu. Investigations were underway, said the police.

Similarly, the police arrested a man with 14,400 Saudi Riyal from the Tribhuvan International Airport. The arrestee identified as MD Najim of Dhanusha was held during a security check at the airport.

Investigations were underway, said the police.