Home Minister’s clarification on absconding MP: Ministry of Home Affairs will not act outside the rules and procedures 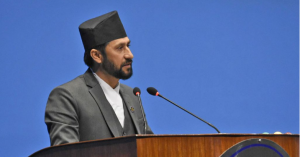 Kathmandu: Deputy Prime Minister and Home Minister Ravi Lamichhane has said that the Ministry of Home Affairs will not do any work beyond the rules and procedures.

In the meeting of the House of Representatives on Thursday, after Congress MPs informed that UML MP Lakshmi Mahato Koiri, who is on the police’s wanted list for murder, participated in the Parliament meeting, Home Minister Lamichhane said that the Ministry of Home Affairs will not do anything beyond the rules and procedures and will not accept pressure and influence from anyone in the legal process.

He made it clear that the Ministry of Home Affairs has not wavered from its promise to work in a lawful manner even in the transfer and promotion of employees and not to charge anyone, and to make similar arrangements in crime control.

Home Minister Lamichhane expressed his belief that there will be no pressure or influence from anyone to influence it in the future.

Earlier in the meeting, Congress MP Ramhari Khatiwada requested to stop the voting process of the MP saying that it was heard that the accused of murder was in the parliament.

MP Koiri, who is on the list of absconding accused, had earlier also participated in the Parliament to give a vote of confidence to Prime Minister Pushpa Kamal Dahal ‘Prachanda’.