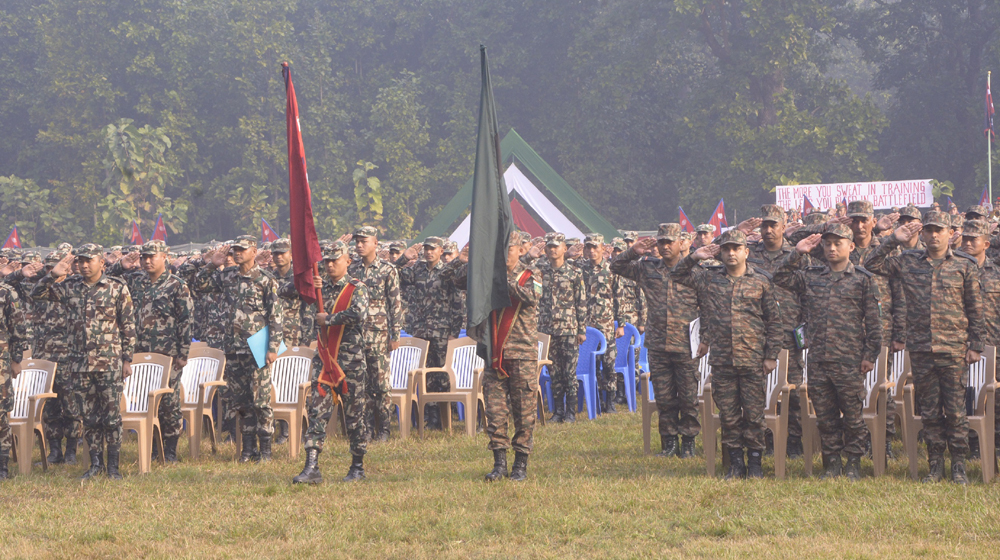 Kathmandu: The 16th edition of the Nepal-India joint military exercise ‘Surya Kiran’ kicked off at Nepal Army Battle School of Saljhandi, Rupandehi on Friday. The exercise began with unfurling of the national flags of both countries and both armies marching in line with the Nepal and India’s military tunes.

During the two-week exercise, an infantry battalion each from Nepal Army and Indian Army will be trained together to whet inter-operability and share experience in counter insurgency, humanitarian assistance and the disaster relief operations.

The exercise was opened by Mid-West Division Chief of Nepal Army, Major General Yam Prasad Dhakal. Nepali team of the army persons is led by Lieutenant Colonel Bimal Kumar Wagle while the Indian side is led by Colonel Himamshu Bahuguna. Each side has 334 military persons engaging in the exercise.

During the exercise, both the armies will be acquainted with themselves with each other’s weapons, equipment, tactics and procedures while operating in counter insurgency atmosphere especially in mountainous terrain. Moreover, the contingents will be exposed to scenarios dealing with humanitarian assistance and disaster relief, high altitude warfare and jungle warfare operations, it is said.

It is believed that the Surya Kiran will contribute to improve bilateral relations and mutual cooperation between both the armies and two-country relations. The 15th edition of the Surya Kiran was held in Pithoragarh of India.

The event is being held every year on a rotational basis since 2067BS, according Nepal Army’s Public Relations Directorate.