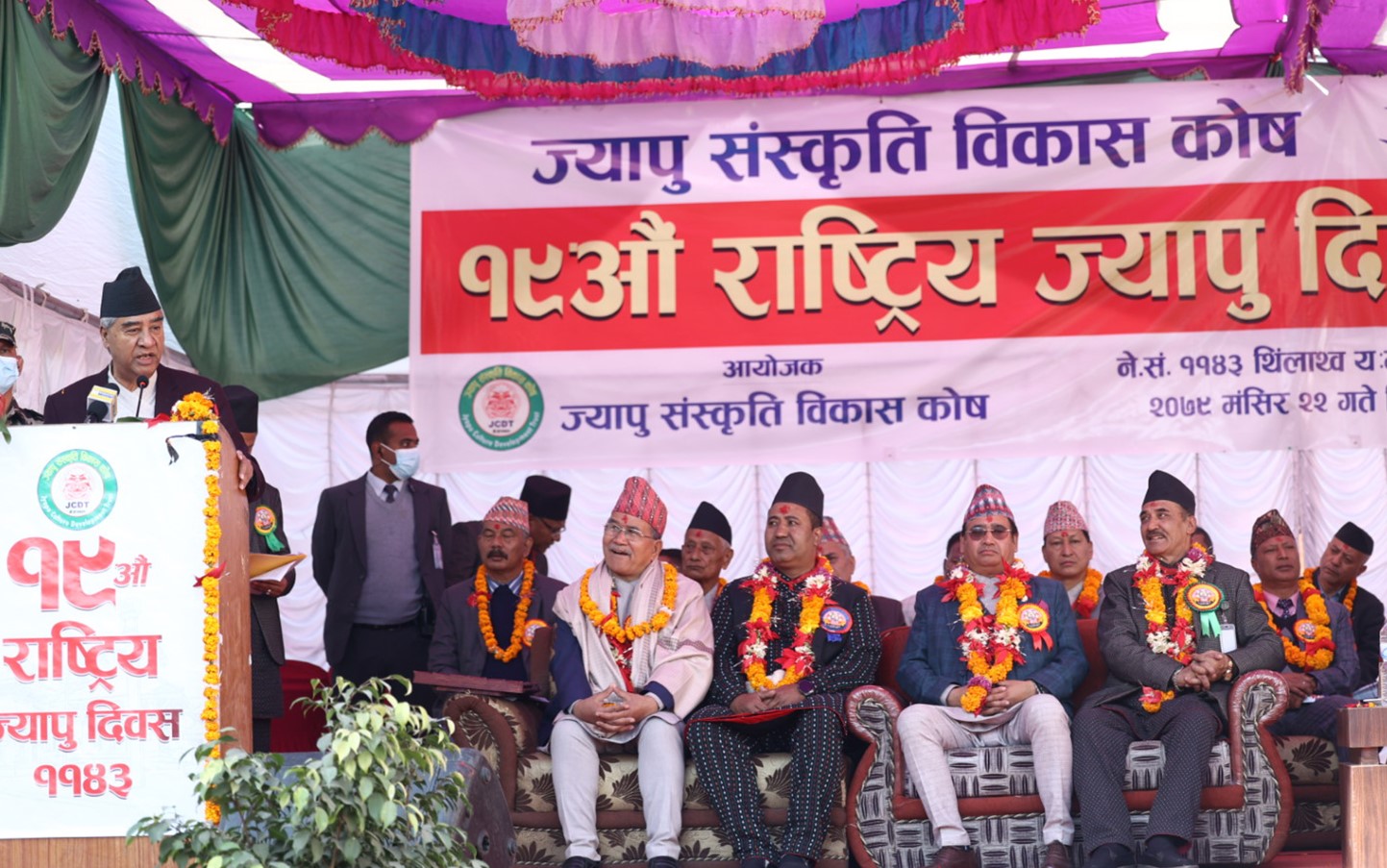 Kathmandu: Prime Minister Sher Bahadur Deuba has said the Jyapu community known as the hardworking and sincere community are the indispensable part of the Nepalese society, agriculture, economy and culture.

In his address to a programme organised at the local Basantapur Dabali by the Jyapu Culture Development Trust on the occasion of the 19th National Jyapu Day, 2022, the Prime Minister applauded the contribution of the Jyapu community to the enhancement of art, culture and civilisation in the Kathmandu Valley.

“Jatra, festival, cultural affairs, civilisaton and art of the Jyapu community are precious treasures of Nepal and it is our common responsibility to conserve such assets,” the Prime Minister said, expressing his hope that the celebration of the Day would help further establish the contribution of the community to the socio-economic development of the nation, protecting and promoting their culture, customs and the lifestyle. Besides, it would prove a means of promoting mutual bonding, unity, harmony and tolerance among the diverse community, according to him.
He took time to praise the efforts by the Valley Jyapu community to keep their culture and traditions alive despite economic and material limitations. According to him, the government has established the Jyapu Culture Development Trust to facilitate the efforts to promote the Jyapu culture.

The government was positive to provide assistances to conserve and preserve Jyapu culture and civilisation in the days to come, he said while praising the Trust for playing a major role in conserving and preserving Jyapu culture despite limited resources.

May the Jyapu Day inspire the Jyapu community to pursue development and prosperity of the country with new enthusiasm, and excitement in cooperation with other communities, and inspire all to further strengthen the spirit of national unity, he wished.

Similarly, Minister for Culture, Tourism and Civil Aviation Jeevan Ram Shrestha stressed the need for people to help implement the government’s initiatives to develop and preserve Nepali art, culture and heritages, and make them known at the international level.

Nepali Congress leader Prakash Man Singh pledged to work to give a life to the Nepali language, art and culture as a people’s representative. The Kathmandu Metropolitan City Deputy Mayor Sunita Dangol said the KMC had helped with the preservation of the local art and culture. Also, the Trust Chairperson Mangal Krishna Maharjan said the Newar community had been keeping its original festivals intact.