Vote count kicks off in Dadeldhura 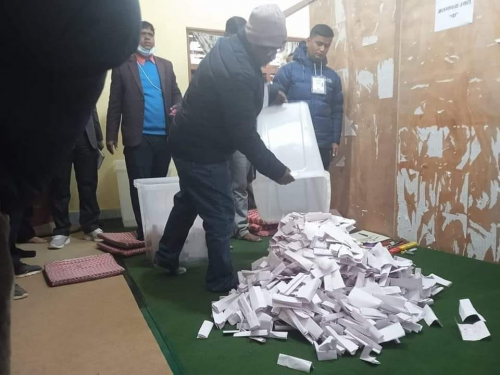 Dadeldhura: Vote counting under the election to the Member of House of Representatives and Province Assembly has started in Prime Minister Sher Bahadur Deuba’s home district, Dadeldhura.

The vote count kicked off at 3.30 pm today at the District Court Building, Amargadhi Municipality-5, which serves as the Office of the Chief District Election Officer.

Out of the total 91 thousand 201 registered voters, 51 thousand 660 voters cast their ballot in the election on Sunday, Chief Election Officer Balkrishna Wagle said.

The district will elect one HoR member and two Province Assembly members. Eight candidates, including PM and Nepali Congress president Deuba, are in the race for one HoR seat from the district.