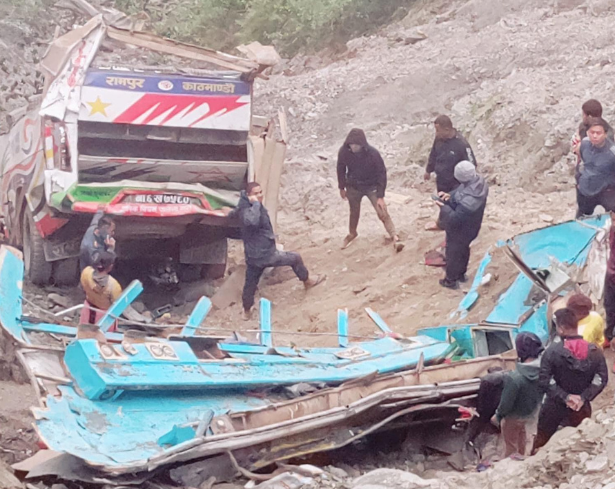 Kathmandu: The identity of the person who died in a road accident that took place early this morning at Mathar in Bulingtar Rural Municipality-2, Nawalparasi east has been ascertained.

The bus (Na. 6 kha.7580) carrying 35 pilgrims from Rampur in Palpa to Mankamana of Gorkha fell down about 150 meters from the road. Five people died on the spot and 30 others were injured, according to the local police office Bulingtar.

The deceased has been identified as Tara BK, Vinaya BK, Dhani BK, Devi Gaha of Rambha Rural Municipality-1 in Palpa and Phoolmaya Majhi of Galyang Municipality-9 Belchaur in Syangja, according to Deputy Superintendent of Police and Information Officer of District Police Office East Nawalparasi, Santosh Pathak.

The injured including the bus driver and co-driver are undergoing treatment in different hospitals in Bharatpur, Chitwan. Two of the injured are in serious condition, police said.