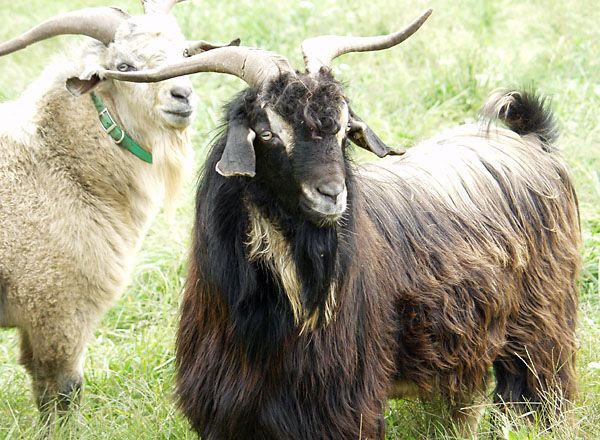 Baglung: In the wake of Dashain festival, the entrepreneurs have brought Chyangra, Himalayan Goats from Mustang. Markets in Baglung, Parbat and vicinity witnessed the arrival of Himalayan Goats.

However, it takes long time for the businesspersons to collect Himalayan Goats for the festival.

Businessperson in Baglung Mahednra KC said four entrepreneurs- two from Parbat and two from Kathmandu- jointly brought 250 Chyangras for the Dashain festival. Some of these goats would be supplied to Kathmandu while most of will be sold at Baglung and Parbat. Six persons were involved in collection and supply of the Himalayan goats, according to him.

Other businesspersons were also bringing the Himalayan Goats from Mustang. Jomsom, Kagbeni and Chamar are some places where such hairy goats are raised. They are supplied to other places via Myagdi, Baglung and Parbat.

The Mustang goats are supplied to Pokhara and Kathmandu cities every year.

KC, who has been buying and selling Chyangras for seven years, said, “A healthy and fleshy Chyangra costs Rs 40,000 in Mustang itself. It is sold at Rs 45,000 or more.” He worried that Himalayan Goats were not imported from Tibet this year. Mustang too has not sufficient production.

As Korala border point has not been opened the businesspersons are unable to import the Himalayan Goats from Tibet. Only Mustang Chayangras do not suffice market demand.

An entrepreneur at Kusma, Raju Pun, said many old traders did not go to Mustang for collecting Chyangra because of soaring price hike. “This year, trading Chyangra is not lucrative,” he observed.

Some years back, Baglung alone saw the arrival of over 2,000 Chyangras, but is not so now. The way to commute is difficult, they shared.

Although it is expensive, many people yearn to have Chayangra in their Dashain cuisine.

The traders are also of the view that the price of the Himalayan Goat went up also because of COVID-19 pandemic.

It is believed that Chyangra meat is tasty and healthier too. Although normal goats are available around the years for meat, Chyangra is special demand during the festival.