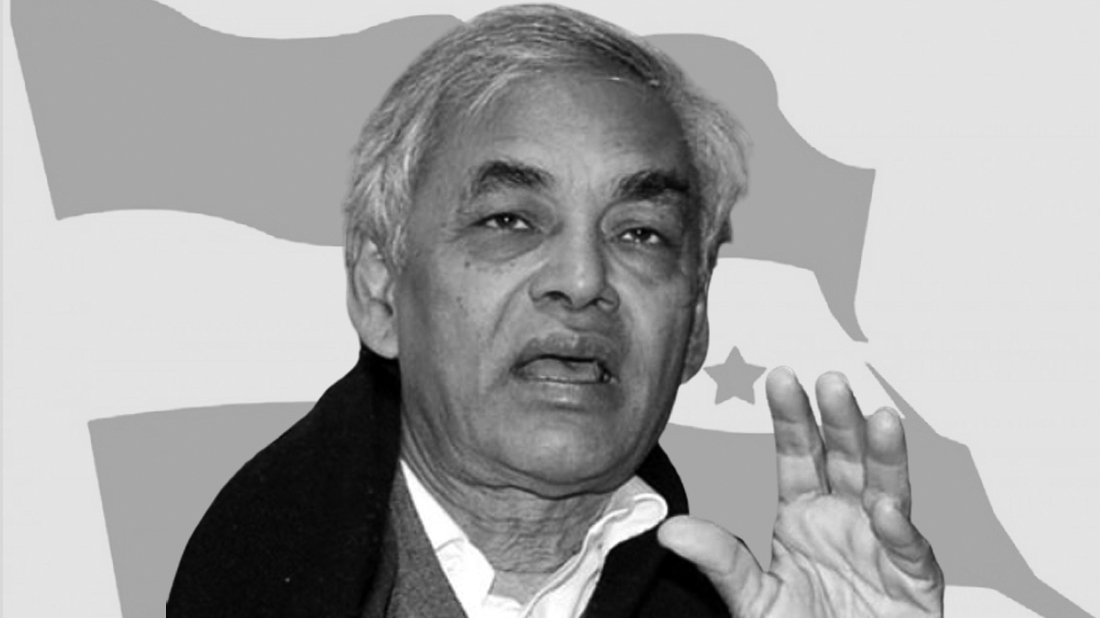 Kathmandu : “Aab Kakara Babu Kahabai, Ke Kar Saharame Rahabai (Now, who I call father? Whom to lean on for support?” Jitanidevi Ram of Bastipur in Lahan Municipality-14 uttered these words in pain as she was mourning demise of Nepali Congress leader and socialist thinker Pradip Giri. Tears from her eyes continued rolling down her cheeks as onlookers could not help stop crying in mourning.

“I feel like I am orphaned after Pradip Babu, who looked after me as his daughter since my childhood, is gone. Now, whom I call father? Whom I turn to in problem? Now, none is left. I feel I am helpless,” she wailed.

He (Giri) during his journey to New Delhi for treatment promised to hear her problems upon his return home, she recalled.

“Pradip Babu was always there for me when I was in money problem. He never said no when I asked for money. I would be the first one, whom he called when he reached the ashram, and he would drink the water I brought and then he would inquire about my problems. All these activities with him would always come before my eyes.”

He always advocated for education for Dalits. He inspired them to become great persons. “I feel like I have lost my father with demise of Pradip thulo buwa,” said Dip Pariyar, a 20-year-old boy from the village. Thulo buwa is the elder brother of one’s father and the locals of Bastipur used to address Giri as Thulo buwa out of reverence.

“He would always take stock of my studies when he reached the ashram. He would teach me new things. His inspiration created a favourable environment for my studies. His contribution helped a lot with my education,” according to Pariyar, who has pursued grades 12 at J.S. Murarka Multiple Campus in Lahan.
Fifty-year-old Chet Bahadur Bhujel of Bastipur remembers Giri who called him ” Pradip Babu’ as a simple person with emotional nature. He was the pride not only of our village but also the nation. We feel immense pain at the passing away of the leader. “With his demise, we have lost our guardian, a good leader with complete integrity.”

Giri was well known as an iconoclast leader in the political spectrum.

Fifty-six year-old Mahendra Shah who found Giri as a man with simple personality had experiences of collaborating with him during the electoral campaign said. As he said, the leader was ever worried about the development of the village and transformation of the society. The society has highly realized his contribution to bringing numerous positive changes in it.

“I had to never fell unaccompanied in his companionship ship.”
Meantime, the Bastipur Lower Secondary School where Giri studied from grade one to 10 0bserved a condolence meeting in the demise of the leader. As school accountant Sindhu Prasad Shah said, Giri had contribution to the elevation of the school. “The school found him as its guardian and we are very sad at his death.”

Giri who earns an identity as the socialist thinker completed his School Leaving Certificate (SLC) in 2018 BS from the Bastipur Secondary in the first division. He was elected the House of Representatives (HoR) member during the 2017 general elections from the Siraha Constituency-1. The Lahan Municipality in Lahan today announced a public holiday in the demise of Giri.

According to mayor Mahesh Chaudhary, we decided to observe a holiday over the death of our good guardian. The local folks gathered and recited hymns collectively since Saturday morning wishing for the recovery of ailing leader who was battling with cancer at Lalitpur-based Mediciti Hospital, Bhainsepati. –RSS