Everything you need to know about Koshi flood impact in Nepal 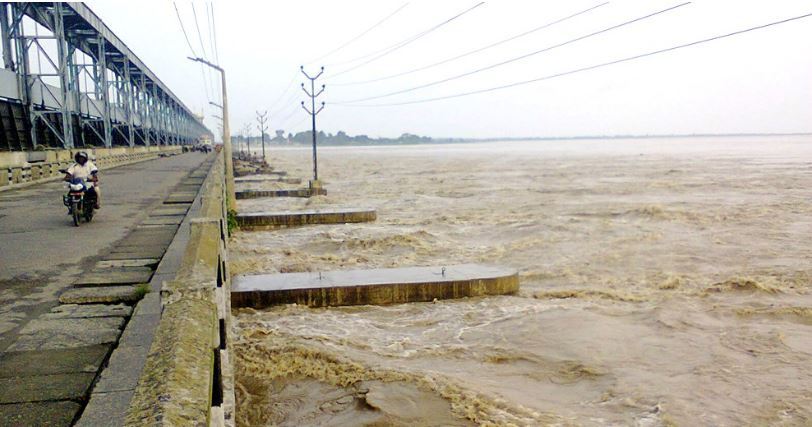 On the Wednesday morning, August 3, at around 4 am, the embankment of Dumribote of Belaka Mucipanility-8 of Udayapur district was breached by Koshi river.

The largest river of Nepal started to flow to the downward settlements of ABC, Bhatepul, Durga Mandir, Ramnagar, Chiliya, among others were inundated by the Koshi current.

Ward number 1, 2, 3, 8 and 9 of Belaka Municipality and ward number 9 and 6 of Barahakshetra Municipality of Sunsari were affected. This matter will answer some of the burning questions about the recent Koshi flood crisis in Province 1.

Was the Koshi flood new one?

Not actually. Flooding in Koshi river is something that occurs almost all monsoon season. However, breaching the embankment takes place occasionally at different sections of Koshi river. The waterway of newly diverted Koshi river was also a part of erstwhile Koshi course.

The local elders say the Koshi would flow through the same course some 34 years ago. ”I have seen Koshi flowing through this area until 2045 BS”, said Deb Majhi, a local indigenous elder living on the bank of Koshi river. Majhi said the Koshi changed its course to eastwards after 2045 BS towards Sunsari.

Why Koshi is volatile river in terms of its flow ?

In a book titled ‘Koshiko Katha’ which roughly translates as the ‘story of Koshi’ authored by Nepal’s first civilian Prime Minister Matrika Prashad Koirala, it is said that Koshi would flow eastward during his childhood days. ”We had to cross the Koshi river to reach Birpur of Sunsari from eastern Sunsari,” Koirala has written. These days Birpur does not require Koshi crossing for its arrival from eastern side of Sunsari.

Likewise, various scholars has said that Koshi would flow some 100 kilometers eastwards some centuries ago. This trend shows that Koshi is historically volatile River which changes its courses at times at its will. Therefore, volatile Koshi is not a new phenomenon from every angle.

How many people are affected from recent Koshi flood?

Media reports from Nepal’s mainstream press have shown the figure of Koshi displacement of around 20,000 in Udayapur and Sunsari districts. More displacement is feared in Saptari district also.

However, local representatives disagree to this figure. Yes, there is displacement. However, the number is not in big volume. This is mainly owing to people living along the shores of Koshi river have alternative homes outside Koshi banks.

Some of them are temporary settlers living for their crops and cattle. Likewise, the land people live is public land. They do not have their ownership there. Therefore, strong infrastructures are not built.

However, there is going trend of selling the land to outsiders in the name of cheap farmlands showing optimistic future of Koshi High Dam. Once Koshi High Dam is built, the Koshi would not be a problem like before; this is the line of persuasion to ordinary public from many land brokers and land mafia.

According to the locals, innocent people are duped to purchase public land by so many other promises including school, police post and the likes. Luckily, no human loss has reported as of Saturday.

What can three tiers of government do to tame Koshi river?

Nepal’s Federal, Provincial and Local governments can do their best to house human settlements in safe locations. However, they can do nothing literally to tame this river.

This is owing to an inkling of Koshi Agreement with Nepal’s southern neighbor India that shares Koshi river downstream.

The Koshi Agreement was first made on 25 April 1954.
There is another consecutive Koshi Agreement updating the previous one on 19 December 1966. In the agreement, the Koshi land was leased for 199 years to India. This diplomatic agreement has made India a primary actor in the Koshi river.

Therefore, in order to tame Koshi river Nepal deeds to have diplomatic dialogue and agreement with India. The 1150-meter-long and 10-meter-wide Koshi Barrage was constructed since 1959 and it was operated since 1962. The 56 sluice gates of the barrage are in the control of India official.

Another factor of hardship of taming Koshi river is its speed and silt carrying capacity. As Koshi flows from north to south, the speed is bigger with bigger volume of silt.

The report says Koshi represents just nine percent of water of Ganges but the sediment representation is 25 percent. Many termed Koshi as the second largest sediment-carrying river after China’s yellow river named ‘Huang He’ in the whole of the world.

According to the ICIMOD report, Koshi carries 100-135 million tons of silt in a year. The erosion rate of Koshi is also high. According to a report at The Journal of Science, Engineering and Technology of The Kathmandu University, the Koshi erosion rate at Barahakshetra area was 169 ton/ha.yr. This report was jointly prepared by K.R. Kafle, S.N. Khanal and R.K. Dahal. -RSS