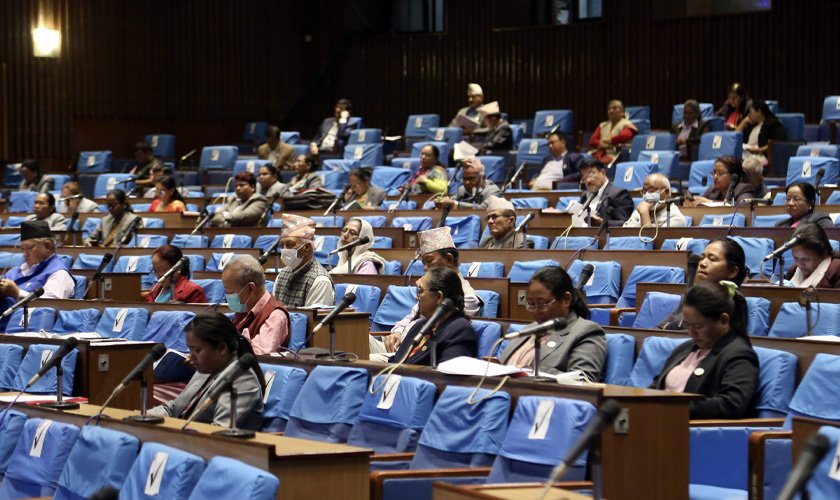 Kathmandu : The House of Representatives (HoR) has started discussion on the impeachment motion against the suspended Chief Justice (CJ) Cholendra Shumsher JB Rana.

On February 13, 2021, a total of 98 lawmakers from the Nepali Congress, Maoist Centre and the CPN (Unified Socialist) had registered the motion to impeach Rana at the parliament secretariat and with it, he was suspended from the post.

The parliament was criticized for delaying the discussions on the motion.

In the today’s session of the lower house, lawmaker Khagaraj Adhikari expressed his concern over a delay in proceeding with the impeachment motion.

Similarly, taking part in the deliberations, Pushpa Kumari Kayastha said Rana faced the impeachment motion as he, as the CJ, was accused of violating the Constitution and laws, failing to lead the Supreme Court rightly. “Rana faced questions in regard with his performance as the Chief of Supreme Court.”

Mahesh Basnet said it was likely that Rana’s term would be over amidst the parliament discussions on the motion as the House term would be ending soon.

Niru Devi Pal was of the view that the impeachment motion against former Chief Justice was registered haphazardly and the same trend was followed in the case of Rana too.

Dr Surya Prasad Pathak said people are watchful about the roles and contributions of their representatives and in the upcoming election, all lawmakers should reach their respective constituents for people’s feedback.

Chandtara Kumari Rana underlined the need for finalizing the motion as quick as possible. She accused him of overturning the case of Ranjan Koirala, entertaining middlepersons in judiciary. As the lawmaker claimed, Rana has moral and ethical deficiency issues.

Ghanashyam Khatiwada opined that the impeachment motion was brought forward slightly late at a time when the election date has been announced and the parliamentarians ought to gear up for the election.

Sarita Kumari Giri asserted that the matter on impeachment motion should be discussed within three days from the day of registration and delay on that part had stalled the court since the Acting Chief Justice has been running the Supreme Court’s function.

Similarly, Dr Dila Shangraula opined that the proposal was brought forward to jeopardize the judiciary on the contrary to the sentiments of the Constitution of Nepal. She argued that people with high integrity and moral character were needed in the judiciary and the parliamentarians should not have divided viewpoint on the issues related to corruption in judiciary.

Dr Bhim Bahadur Rawal blamed that the executive, legislature and judiciary were flouting the laws. Min Bahadur Bishwakarma said neither the government nor the parliament was divided on the impeachment motion when it was in the process of registrations and called for the need to finalize the proposal in the same manner after holding discussions.

Durga Poudel said that since all civic societies and public were on the same page on the matter of impeachment motion against the Chief Justice, the proposal should be endorsed by the parliament.

Prakash Rashaili called for endorsing the proposal and work towards reforms of the judiciary which, he said, was plagued by dilly-dally and irregularities.

Similarly, Ram Bahadur Bista said though the motion was most urgent and need of the hour, the parliament discussions on it was delayed. Accusing Rana of acting against the Constitution, he said it was reforming the judiciary.

Rangamati Shahi described the proposal as the demand of time (suspension) CJ Rana failed to ensure a clean atmosphere in judiciary while Prem Suwal accused him of failing to people’s right for justice and demanding his unethical stake in the executive.

Dil Kumari said the motion against Rana was to be brought for demanding his share in the Council of Ministers and trying to establish inappropriate connection with executive while Hit Bahadur Gajurel said the motion was capable of having a long-term importance. “It was endorsed with univocal votes, it would be a precedent for sending a positive message to the judiciary in the future.”

As he claimed, Rana faces charges which are against the principles of the separation of powers.

Haribol Gajurel echoed the need of discussing whether the motion was appropriate or not and forging a wider consensus among the ruling and opposition parties soon.

Khem Prasad Lohani said a delay in initiating parliamentary discussions on the motion provided a room for having a doubt on it. As he said, it is for serving vested interests of the parties rather than for promoting good governance and democracy.